Dementia is a general term for a decline in mental ability severe enough to interfere with daily life.  Memory loss is an example. Alzheimer’s is the most common type of dementia. 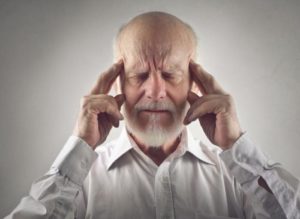 Dementia is not a specific disease. It’s an overall term that describes a wide range of symptoms Dementia is a general term for a decline in mental ability severe enough to interfere with daily life. associated with a decline in memory or other thinking skills severe enough to reduce a person’s ability to perform everyday activities. Alzheimer’s disease accounts for 60 to 80 percent of cases. Vascular dementia, which occurs after a stroke, is the second most common dementia type. But there are many other conditions that can cause symptoms of dementia, including some that are reversible, such as thyroid problems and vitamin deficiencies.

Dementia is often incorrectly referred to as “senility” or “senile dementia,” which reflects the formerly widespread but incorrect belief that serious mental decline is a normal part of aging.

Memory loss and other symptoms of dementia

There are many different causes of memory problems. If you or a loved one is experiencing troubling symptoms, visit a doctor to learn the reason. Some causes of dementia-like symptoms can be reversed.

While symptoms of dementia can vary greatly, at least two of the following core mental functions must be significantly impaired to be considered dementia:

People with dementia may have problems with short-term memory, keeping track of a purse or wallet, paying bills, planning and preparing meals, remembering appointments or traveling out of the neighborhood.

Many this mental illness are progressive, meaning symptoms start out slowly and gradually get worse. If you or a loved one is experiencing memory difficulties or other changes in thinking skills, don’t ignore them. See a doctor soon to determine the cause. Professional evaluation may detect a treatable condition. And even if symptoms suggest dementia, early diagnosis allows a person to get the maximum benefit from available treatments and provides an opportunity to volunteer for clinical trials or studies. It also provides time to plan for the future.

Dementia is caused by damage to brain cells. This damage interferes with the ability of brain cells to communicate with each other. When brain cells cannot communicate normally, thinking, behavior and feelings can be affected.

The brain has many distinct regions, each of which is responsible for different functions (for example, memory, judgment and movement). When cells in a particular region are damaged, that region cannot carry out its functions normally.

Different types of dementia are associated with particular types of brain cell damage in particular regions of the brain. For example, in Alzheimer’s disease, high levels of certain proteins inside and outside brain cells make it hard for brain cells to stay healthy and to communicate with each other. The brain region called the hippocampus is the center of learning and memory in the brain, and the brain cells in this region are often the first to be damaged. That’s why memory loss is often one of the earliest symptoms of Alzheimer’s.

While most changes in the brain that cause dementia are permanent and worsen over time, thinking and memory problems caused by the following conditions may improve when the condition is treated or addressed:

There is no one test to determine if someone has this mental illness. Doctors diagnose Alzheimer’s and other types of dementia based on a careful medical history, a physical examination, laboratory tests, and the characteristic changes in thinking, day-to-day function and behavior associated with each type. Doctors can determine that a person has dementia with a high level of certainty. But it’s harder to determine the exact type of dementia because the symptoms and brain changes of different dementias can overlap. In some cases, a doctor may diagnose “dementia” and not specify a type. If this occurs it may be necessary to see a specialist such as a neurologist or gero-psychologist.