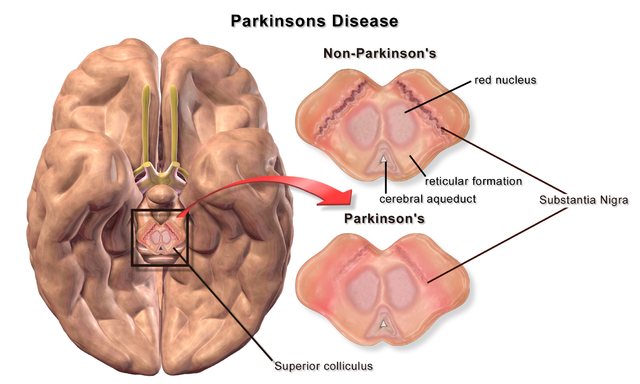 Parkinson’s disease (PD) is a chronic and progressive movement disorder, meaning that symptoms continue and worsen over time. Nearly one million people in the US are living with Parkinson’s disease. The cause is unknown, and although there is presently no cure, there are treatment options such as medication and surgery to manage its symptoms.

It’s clear that Parkinson’s Disease involves the malfunction and death of vital nerve cells in the brain, called neurons. Also, Parkinson’s primarily affects neurons in an area of the brain called the substantia nigra. At the same time, some of these dying neurons produce dopamine, it’s a chemical that sends messages to the part of the brain that will surely control movement and coordination. In like manner, as PD progresses, the amount of dopamine produced in the brain decreases, leaving a person unable to control movement normally.

By the same token, the specific group of symptoms that an individual experience varies from person to person. Primary motor signs of Parkinson’s disease include the following.

On the other hand, scientists are also exploring the idea that loss of cells in other areas of the brain and body contribute to Parkinson’s. For example, researchers have also discovered that the hallmark sign of Parkinson’s disease — clumps of a protein alpha-synuclein, which are also called Lewy Bodies — are found not only in the mid-brain but also in the brain stem and the olfactory bulb.

In addition, these areas of the brain correlate to nonmotor functions such as a sense of smell and sleep regulation as well. The presence of Lewy bodies in these areas could explain the nonmotor symptoms experienced by some people with PD before any motor sign of the disease appears. The intestines also have dopamine cells that degenerate in Parkinson’s, and this may be important in the gastrointestinal symptoms that are part of the disease.